A language for describing dreams

I feel like there are some things in dreams that cannot be properly described. Many of the things I see in dreams cannot be described in less than 30 words. Maybe we should make a sort of new language for describing dreams. Like in a dream when I dream about someone who is my father but in real life doesn’t exist, he just feels like a father figure but I had no childhood with him in the dream. Almost like a non biological father. Maybe we should have words for these things. Maybe we should make a new more descriptive language for dreaming. Maybe we should start a thread that works like a dictionary for dream words and a second thread where people can submit ideas of things they want words for. Is it worth a try?

My personal view is dream records are personal and this would make it complicated. The words used should be intuitive.

For example
“a sort of new language for describing dreams. Like in a dream when I dream about someone who is my father but in real life doesn’t exist, he just feels like a father figure but I had no childhood with him in the dream.” I would write “dream father”

I also use [jump] for when a dream leaves out any time.
[shift] when dream 'continues but the environment fundamentally changes.

Having to use words originating from other dreamers in MY dreams would feel foreign to me.

We may as well give them an option to use other words when they cannot describe things to accurately relay information to others. Maybe just like a common language so we can understand each other. We have already created wordsblike hypnogogia to describe things and names for methods of lucid dreaming so why stop there?

Those new words tend to be organically created by taking part in the discussion. LD4all members have created expressions like shards (short fragmented dreams) OOME, out of mouth experience (that dream where you try to pull a substance out of your mouth) hollows (“NPC” dream characters with no personality)

The new words are created when somebody needs them, and sometimes, others start using them because they fit. I agree that creating a list of completely new words would feel unnatural, but maybe we could try to collect the expressions that LD4all has already created?

Maybe we should put them in a list so we don’t have to spend a long time searching for them and they are easy to access?

This makes a lot of sense! Dreams are vivid and speak in a nonhuman language. I am trying to get back into dreamwork/lucid dreaming.

Tell me more about this idea!

I have been gone for a while, I just got back on. My idea is that we should invent words for these abstract concepts, the ones that we cannot describe well in normal words. I think we should detach these words from any existing language and start with what sounds right. I think that a long time ago we all used to speak the same language. We could try to use our instincts to find those old words again. Maybe we can gather inspiration from our dreams. We could search for words in our dreams and make a dictionary for them. The words need to feel right and fit with their meaning. I want it to be a descriptive language that we almost instinctively understand. I want words for those things I cannot describe.

I agree with @moogle that the challenges to a dictionary is that our dreams and how we write them can be personal and very specific to the person. But I like the idea of trying anyway, at least for someof the broader strokes and hard to describe moments that we might have in common with each other. Maybe one way is for people to start sharing situations they commonly encounter in dreams that are not easily explained in a single term that they either have to explain every time or have come up with a code for it.

One of my commonly encountered situations is a very fluid and poorly felt sense of self. In the same dream, I may experience myself as me, then as a different main character, then an invisible observer all without noticing the changes in the dream and having difficulty even after waking, determining at which points I shifted or if I was all of those simultaneously. I usually try making sense of it after waking, ascribing whatever pronouns feel most true for the moment I’m describing.

I use the word “Skip” to indicate any breaks in time within a dream though I have yet to decide on how to indicate when the skip is due to that part of the dream being forgotten versus when the dream just jumps to a new section.

I use words made by other dreamers quite a lot. I use DC and DO a lot and only started using those after coming to this forum. There’s a lot more of that “dream dictionary” that I’ve learned by reading dreams from other people here. I’m not sure if I learned about the void before encountering and naming that place myself. Seems like a lot of people call it the void too and experience a similar “empty dream world” when between dreams or between a dream and waking up.

This is kinda off-topic, but there’s something I experience in waking life sometimes that I struggle to find words to describe. The simplest way to put it would be “altered perception”. I still see everything, but it feels like my brain “understands” it differently and it’s extremely distracting. So it’s not just dreams that present us with things we struggle to find words for. Waking life can have that too.

Sorry for the late reply,i am 12 and i looked at your post about 2-3 months ago and then signed up.Anyway,i agree with your language making.The thing is ,how are we going to do it,but i also agree on moogle woth the other side.

If we could make a language,you could make your own language.I would say end to end a dream and skip to skip a dream etc etc.

Yah, I am working on a complete new language to override english, it will allow you to create your own words on the fly because it is syllable based. Since there are 6000 3 letter syllables each can describe a base concept. For example, computer screen would be the syllables for electronic visual interface. Each syllable is 3 letters long. So “computer moniter” would be as short as “abiahiboh”(this is just an example and not the real language) you could say “blank computer monitor” with jahabiahi*boh. The asteroisks are just for ease of reading and the langauge would expect you to count 3 letters for each syllable. This would allow you to express complex ideas like “green keyboard with red backlighting and strong keys” in a small fraction of the time. Simple ideas would take longer though. The main purpose though would bw to force people to think about what they are saying. You have know know a little about a computer monitor to call it an electronic visual interface. It forces you to think, id you can’t think you can’t talk. This would prevent people from being willingly stupid and blabering about things they don’t understand. The punctuation would be speach pauses of different lengths, just like talking. The conjunctions would be logic symbols or such making them far shorter, all could be made in 3 or less pen strokes. Ahihabini=jib=hibfahinu electronic hand interface with keys and green backround lighting. Green backlit keyboard. Same length as english but gets easier the longer the concept encouraging people to speak of more complex ideas. Theoretically an entire sentence could be one word, but that would be hard. Basically, every noun and all it’s adjectives would be one word. Useless filler words would be removed “hih kag / mih” he ran to the store, english has too many filler words. Each kind of sentence would have a mark Intergogatory? Exclamatory! ImperativeX
English makes imperative and declarative look to similar so imperative needs a mark. I am eliminating useless letter such as x and c because they just say cs and k/s. I am adding a symbol for each vowel sound. That way O and oo would each have their own symbol. Do you like my progress so far?

I actually am utterly speechless

I love your progress so far

If you need any help,you can let me know @Q17,thanks!

I would be further along but I am going kinda slow due to it being 2020 and everything going wrong, but I am still working on it.

A sketch for every dream is the superior method. All that writing just makes you hate your DJ, probably doesnt help your dream brain part get structured into what it should be.

You might not remember every nuisiance in 5 years when looking back at it, but is that why we dream? 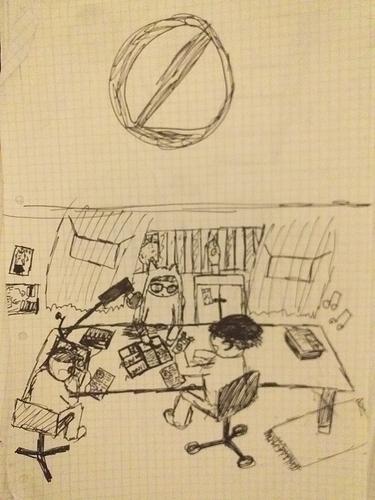 The premise is very interesting, and so is the syllable-based language, andwhen I got in the habit of writing out dreams first thing upon waking (and I must do it quickly before I forget the dream, so my pen-and-paper journals are so much more of a mess than the Dream Journal that I keep here) then I may have done it differently.

Somebody in my dream who is my “father” but not my father, would depend on whether my dream-self or “dreago” (dream + ego, yes?) was embodied or disembodied, or closer to my waking life ego, or a completely different and strange person, and if the father character was the “dreago”'s father or was a paternal figure without the emotional or mental strike of recognition like ‘this is my dad’.

So I would probably write something like “Archetypal Father” like Carl Jung had this idea of the puer/puella, animus, anima, senex, and so on. I could write “archedad” (archetypal + dad) or put in an acryonym/initial like “nIWL” (which stands for “not In Waking Life” and marks an incompatibility between waking life memory/logic and that matter-of-course presented in the dream.)

I remember naming something that was like Nightcrawler teleportation in dreams as “lensing” because it reminded me of looking into a microscope and how there would be some blur in the adjustment before the focus became clear. I don’t believe that I thought up of a term for closing my eyes in a lucid dream and noticing that I can’t “close my eyes” in dreams in the sense of blocking out the external world, because my mind would keep another world behind my eyelids in which my dream-eyes would be open…blinkportation, maybe? (blink + teleportation)

There was a member on this forum who used the phrase “thought command” for changing things in a lucid dream, and while that is very succinct I felt that it was much more direct than my own style of “dream reality warping”…Stephen Berlin who ran a lucid dreaming vlog channel on YouTube called his technique “transformotion” because he noticed that dream symbols tended to change based on what was already present in the dream so it’s transformation plus motion. My phrase for doing the same thing was more unwieldy than either of theirs: “cultivated expectation”, expectivation maybe?