What Book Are You Reading? - Part VII

This is a continuation of the “What Book Are You Reading? - Part VI”, which can be found here.

Good book? Fan of Gaiman here, wondering if I should pick up that book or pass.

Well I haven’t gotten very far yet to be honest. It’s short stories and poems, and I finished a couple of each. I found the poems really intriguing even though I don’t normally like poetry at all. One of the short stories was just okay, and the other one I thought was absolutely great.

It’s not as good as American Gods, or Neverwhere, (those are the only other Gaiman books I’ve read before,) but it’s still good. It’s up to you. I’d say if you don’t mind short work, and like Gaiman it’s worth a read.

I went so long without reading very many books while I was at college. Now that I’m home I’m reading several at once.
The Rites of Odin - Ed Fitch
Shadow Magick Compendium - Raven Digitalis
Beginner’s Guide to Practical Magick - uhh…not sure, don’t have the book handy

A couple of books by Oberon Zel-Ravenheart

When I get through some of these books I’m thinking of rereading Eragon and Eldest, since I recently got Brisingr and it’s been a while

(Trilogy by Christopher Paolini of course)

The idea is, if you manage to live until 2050-2100, you have (so the authors think) a pretty good chance to live very long, or indeed forever, since progress in the areas of biotechnology, medicine, nanotechnology and artificial intelligence (related to the concept of the “Technological Singularity”) will eventually help us to end aging.

I’m still at the beginning, but it’s an interesting read (at least for someone who isn’t convinced of an afterlife or similar concepts). Despite the over-the-top title, the described approach seems to be quite scientific (with sometimes Kurzweil beeing the research subject), which is no wonder, since Kurzweil is pretty famous as a computer scientist.

when I finished reading my last Tom Holt book…

so I paid a visit to the library and have started on
Earth, Air, Fire and Custard by the same author

and have Fishy Wishes ready to read 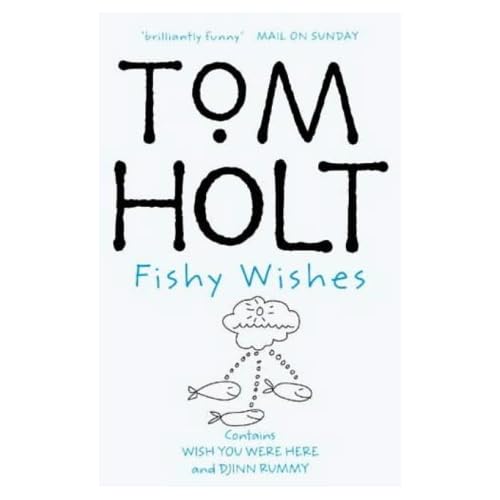 I’ve read the first part of this book before but it was a while ago so I will enjoy re-reading it.

“mending the past and healing the future with soul retreival” by Alberto Villoldo, Phd. Very interesting stuff…
Also “awakening the Buddha within” by Lama Surya Das.
I love books…

I finished “Point Blanc” 2 days ago and “Stormbreaker” 4 days ago!

Next book is “Eagle Strike” then “Scorpia” and “Ark Angel” Eventually “Snakehead” so far… after there is going to be “Crocodile Tears” and then the next two are untitled. Great series for anyone <16 years so… If you can find it, give it a read!

On Hitler’s Mountain by Irmgard A. Hunt.

Finally , yes FINALLY ! …
I am currently reading Stephen King’s
The dark Tower Series (finished the 1th book in about 3 days

Recently finished Romeo and Juliet, will be reading Jane Austen next.

Finally , yes FINALLY ! …
I am currently reading Stephen King’s
The dark Tower Series (finished the 1th book in about 3 days

After a year of on and off reading i finally finished The Dark Tower series. It’s gotta be my favorite series ever. heh.

I actually started reading an author i never thought i would: Virginia Woolf. I just never was interested in the subject materal, but I picked up Orlando begrudgingly because i hadn’t read any Virginia Woolf and because i heard it involved a transformation, which is always cool.

I’m enthralled. I haven’t read any literature in a more romantic style in a while, and it’s a nice break from the more modern styles i’ve been reading lately. Her style really reminds me of Mary Shelly (for whatever reason), and even though i’m not far into it i already give it a whopping reccommendation.

Orlando is one of the greatest books I’ve ever read. Shame it’s the only one by Virginia Woolf that I would passionately recommend, all others are… I don’t know. Dated, or simply too British to classify as “World Literature” or whatever you might call it. But Orlando!.. it’s like they x-rayed my soul (a part of it anyway) and put it in a book.

Right now I’m reading A Mathematical Theory of Communication by that guy I forgot the name, from Bell Labs, Biografía del Diablo (“Biography of the Devil”) by an Argentinian who lives in Spain, called Alberto Cousté, and of course An Icelandic Primer by a certain mr Sweet.

Reading “the 39 clues” and “the google story” over my friend’s shoulder!

I’m reading The Great Gatsby and am just in love with it, honestly. The wonderfully unashamed indulgence of the 1920’s: it’s magical, at least how it’s portrayed and critiqued in this book. Its…surrealism, really - although not really surreal, that’s just how it comes off to me - is incredible. I mean, it gives me this feeling of a dream, in a way. I want to meet Daisy, haha. I love this book to death.

And soon, Pedro Páramo, which I must write about for school.

I started reading You Don’t Know Me by David Klass earlier. I really liked it a lot more the first time. Thinking of ditching it and reading Along Came a Spider.

Gotta love those charity book sales, I got so many books for like nothing!!!

I JUST finished Brisinger. That is Christopher’s BEST book yet. I can’t wait for the 4th one. I hope it ends with Arya becoming a rider.