Oleg, I’m sorry you were close but not quite there.

Siiw, I see no reason why it wouldn’t count, so congrats on the points. :o

The scores are updated. Rhewin has been busy with real-life things, so I have temporarily marked him as inactive so that he does not affect the team averages. paual’s forum profile shows her last log-in as in April, so I have marked her inactive as well.

The bad news is I tried to dream incubate about eating popcorn. Sadly, I awoke hungry and confused! Lol.

The good news is I have dreampt about my workplace for the last 4 nights. So, I will do more RCs at work. Hopefully I will trigger a LD in upcoming nights.

First LD all week and I tried to earn some task points… sadly no dice (or pizza even).

Task 1:-E Did some date math. | Levitated a van and went to the Astral Plain.
Task 2:-E SUPER SAIYAN SCIPIO. | Smashed things. Ripped a tree out of the ground. Transformed via injection.
[/spoiler]

^ As I said in chat, I can’t count the chain points as you said you were unsure if you DEILDed between lucid parts at any point, and your dream journal only shows re-entering the ND and becoming lucid. That said, you still get the points for the short LD, and I updated the scores to reflect that.

The next task goes up in under 14 hours! Get your team point claims in ASAP!

The Shapeshifter team averaged 1.33 Task 3 subtasks per member and gets its vote of Spheres set as the Task 4 theme! The Action team averaged 0.86 with a vote of Altitude and the Traveler team managed 0.83 with no vote. I’ll put up the unused Altitude task in the team workspaces so that people can see what could have been, but remember that it is worth a whopping zero points; don’t try to do it for the sake of the LC.

I don’t really have an interesting description for this task as I did for the previous ones. I was running out of task ideas and thought of a random noun, and it just so happened to make for an interesting, medley-style task!* Hold something spherical that is not a part of your body: 10 points

The Team Dream requirements for this week are as follows.* Action: Decide on a sport that uses a ball to play with at least one teammate.

Had an FLD today where I was trying to do last weeks LC. I summoned and ate a chocolate brownie if it counts for anything. Sadly I hadn’t read this weeks task beforehand!

That said, tasks don’t expire, so you would have earned those points if you didn’t already have them. As you said, you have this week’s tasks now, so be sure to check in with your team’s page and start planning!

I made balls of mozzarella cheese last night. I t wasn’t lucid. I have only the phone today and tomorrow and will type it up properly later.

Oleg, there’s always something you can do if the tasks don’t come to mind; your personal goal is worth points and should be easy to remember!

My recall has been lacking recently, so its a little choppy, but I am able to stay lucid longer that I previously was able to. I am claiming points for:

drd, I added in all of those points. A shame you rolled like a cylinder and not like a sphere.

I updated the scores with your latest dream.

I was in a setting based around gigantic food. Massive rye bread slices formed a circle that was floating in the air above a mountain range. I was climbing it with invisible rope. The slices were several hundred meters tall.

^ The massive bread is supposed to feed the massive dragons that you keep killing in your NDs. Now we have too much bread, and it grows to hundreds of meters tall. Way to go!

I’ve updated the scores with your points.

It’s been 48 hours, so let’s confirm the remaining Team Dreams. The Traveler team has two votes to visit Venus out of three votes total, so Venus it is! Cue jokes about where men and women come from. Travelers can get 30 points by taking a teammate to Venus, and other participants can get 15 points for taking a Traveler team member to Venus.

The Shapeshifter team needed to lock in two aspects of their subtask this week; what to be filled with and how to move after being filled. For the former, I received one vote for helium, one for “It doesn’t matter to me”, and didn’t receive a third vote, so helium it is. For the latter, I received one vote for floating, one for rolling, and didn’t receive a third vote. Since the same person that voted for helium also voted for floating, I will maximize fairness and choose rolling as the movement method so that both voters get some say (this also maximizes LC points if they roll head over heels!); you can always float after getting the LC points.

drd, I know for a fact that Wyvern has points to claim, but he hasn’t done so yet. I updated the scores with your points, so enjoy your short stint in first place.

Alrighty then. I do indeed have points to claim from 2 nights ago.

Had a long LD where I played some American football and then realized the ball wasn’t spherical, so I quickly switched to dodgeball with some DCs. (No team members present and this was before the team task was decided on anyway)
Another part of the dream I was on another planet… but that was kinda lame because I just appeared there by chance. I’d prefer to willingly travel there… or at least explore more, so I won’t count it.
There was some archeologist person digging about the sand on the planet and found a mask… which promptly turned into some Metroid/facehugger like creature and clamped onto his face. This caused a freaky alien transformation for him. It also reminded me of an RP character of mine, for whatever reason, so I turned into this: 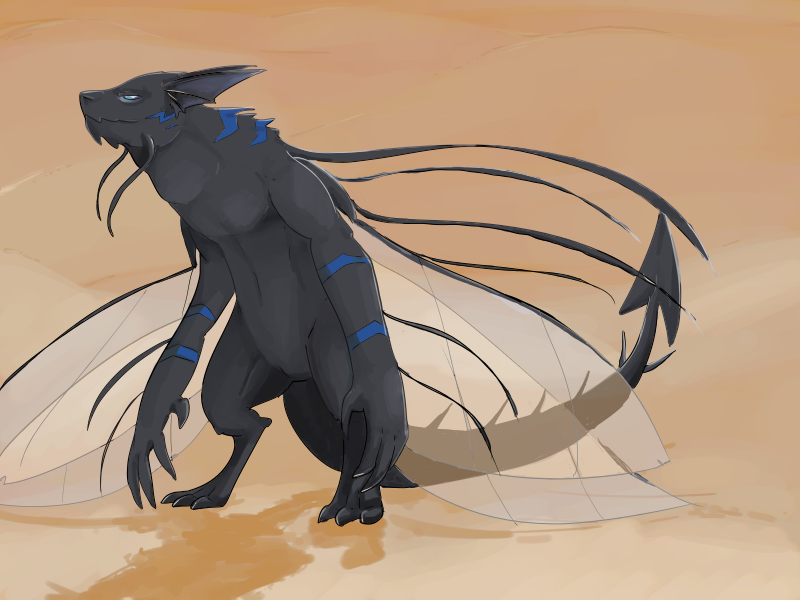 Welp, there’s those points. Is it wrong if I was excited when I saw drd pull ahead of you for a bit? It wasn’t anything against you, Wyvern, but rather watching somebody new take the lead that made me excited. I’m sorry!

At one point stuff happened.

Said stuff… well, I suppose that videogame-elements got mixed into the fray, and that’s where some of the strength came from (it was armoured plating, kay? ._.). Mostly, I attacked robotic enemies, and I caused large damage on the exterior metal plates. The interior’s remained okay, though. Still, though, it was more than what could be done in real life…

… does that count for ‘smash something sturdy’? If not, that’s okay. I still have a fail-safe prepared, I believe… :>