As seen in my dreams (using LDs for creativity)

As Seen In My Dreams
How I used my lucid dreams as a source of guidance and inspiration for the design of a website about lucid dreaming
author: pasQuale
This article appeared in LDE issue 56

I’m the founder of LD4all.com, a website and community about lucid dreaming. Since the beginning, now 14 years ago, I have always used my lucid dreams as guidance and inspiration for the look of the website. In this article I want to share with you two of the lucid dreams I have had which have profoundly influenced the graphics and layout of the website.

Uncovering a new creative flow
In the early beginnings (the year 1996), LD4all wasn’t called LD4all yet. It was called:”Through the Mirror - Beyond Dreaming” and it was my graduation project for Art School. In those days, Internet was something new - so as a student in New Media I naturally felt drawn to the new medium. I decided to make a website about lucid dreaming. At that time, I had just discovered lucid dreaming myself, from reading the book “Creative Dreaming” by Patricia Garfield. I was so excited about it, that I wanted to share this amazing ability with the world. And what better way to do it than a website. 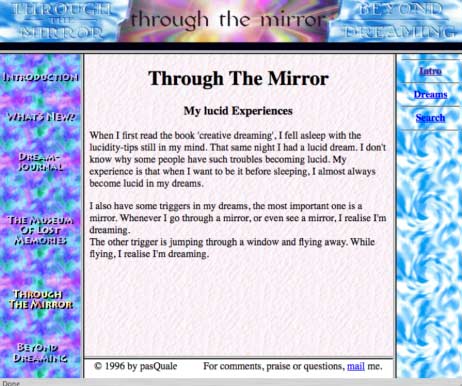 I started building the website, but I wasn’t satisfied with how it turned out. I had created the layout you see above, and from then on, the only thing that needed to be done was to basically fill in all the pages with textual content. The site was boring. I got stuck. I didn’t want to continue like that, but I also didn’t know how to break out of my “designer’s block”. I decided to become lucid in a dream and search for the design of my project. I hoped to see something in my dream that would inspire me. That night, I became lucid.

When I woke up, I immediately sketched what I remembered. I had seen, very clearly, the screen divided into two equal parts, with on one part images, and the other part text. Also, thick black lines bordering the text. It was as if that lucid dream had uncorked a bottle of new inspiration. I now suddenly knew how to go forward with the website. It meant a drastic turn from the way it had been looking before that. Below is a screenshot of one of the pages of the final design. 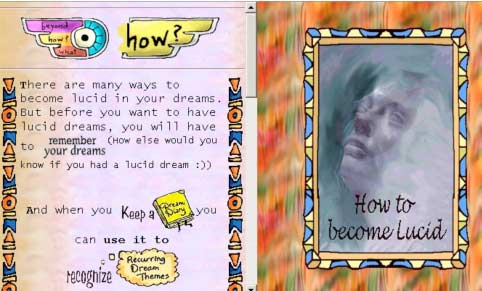 Recognize the elements from the lucid dream: The black outlines, the borders surrounding the text, and the division of the screen in two even parts, with text to the left and illustrations to the right. I also adapted the colorscheme to what I saw in the dream, a gradient of pastel colors. So the dream certainly made the design go another way! If you are curious, it is still accessible through here. (it’s password protected; use name: dreamer, password: lucid to enter)

Lucid design guidance
After I graduated, “Through the Mirror” stayed online, and grew. After a few years, I wanted my own domainname. “throughthemirror.com” or something similar didn’t have a ring to it so I had decided on a new name: LD4all.com. I really wanted a new look for my newly named website. Once again, I decided to incubate a lucid dream to look for the design of the new LD4all.

When I became lucid, I asked the dream to show me the new design for LD4all. The dream immediately responded. At first, I saw a huge golden logo, rotating in a starry sky. After the logo was shown, I saw an image of the layout of the website.When I woke up, I sketched all I could remember. This is the sketch of the layout. 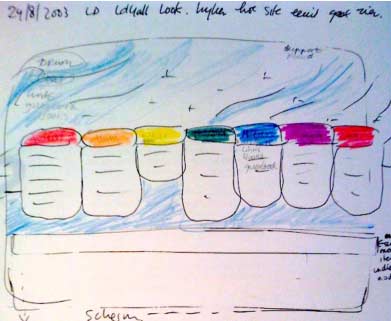 The layout showed an aurora in the top, colored drop down menu items, and a light blueish color. The drop down menu items were an element I had already pondered on in waking life. A new element brought by the dream was the “aurora” in the starry background sky. These elements I still remembered when waking up, but it was very difficult to recreate a website layout that matched it.
The final design you see below. This design is still online and is now called “The guide”. 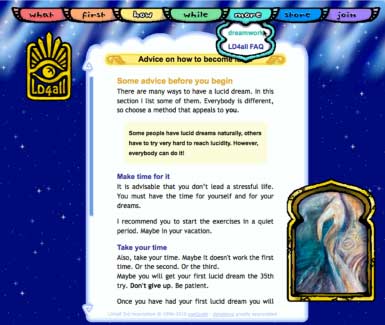 So, in this example, the inspiration from the dream wasn’t a complete turnaround from the way I had already been designing in waking life. The dream did give me some nice new ideas, like the aurora.

The LD4all logo
The story of the LD4all logo is different. Before my lucid dream, I had already been working on the design of the logo, but no sketch I had made up to then really “hit the mark” so to speak. Yet, I didn’t really think of specifically looking for a logo in my dream, I just wanted to see “the design”. My lucid dream had presented me with the perfect logo. This was beyond any guidelines for design I had previously experienced in a lucid dream. The image of the huge golden logo, rotating in the starry sky stayed there for what seemed a long time, so I could really take in all details of it.

But eventhough I knew exactly how it had to look, it was quite an effort to get it right. I had remembered the important elements: the way the “beams” had to go over the surrounding border and the way the “eye” was connected to the borders.

Above shows the sketch of the logo I made right after the dream. Next to it is the first official version of the logo, and the last image is the logo currently in use on LD4all.com

So if you ever have something you need inspiration for, why not use your lucid dreams for it?
Call forth your project in your lucid dream and take a good look at it. Your dream could take you in new directions!

^This, great thread thanks

many thanks for this, and of course, for having created and maintaining LD4all as the fantastic LD community it was, and still is.