The LD4all Museum Of Lost Memories

This museum has been opened for the occasion of LD4all’s 14th anniversary. You may have read the History of LD4all already. Now, I present to you: the Museum of Lost memories.

Background story on the Museum Of Lost Memories: It came from a very vivid lucid dream.

I have excavated a few LD4all treasures, some of them never been seen online before. Enjoy! 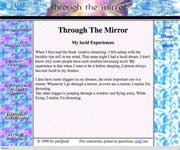 The prehistoric era, when the website currently known as LD4all was being designed and built. Although it was online at the time, it wasn’t officially announced yet.

This first era,is the officially launched website. The design was inspired by a lucid dream. It didn’t have a lot of text, but many, many animations and images. The aim was to bring in a dreamlike feeling where the visitor could wander around.

The Era We Had The Wings. You will see why when you go to this room.

The Transition Era. The domain LD4all.com is now registered, but the site design still is “Through the Mirror” style. Some new elements pop up though.

The LD4all era. A completely new design, with a new logo.

The Return Of The Wings
1 september 2007 to today 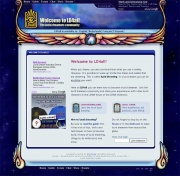 A collection of Mirrors

The evolution of mirrors throughout the ages. I mean, come on. It was called Through the Mirror.

Links to treasures excavated by members and holding fond memories.

The prehistoric era, when the website currently known as LD4all was being designed and built. Although it was online at the time, it hadn’t been officially announced and I doubt anyone managed to find it in those days.

Artifacts
Only a few artifacts are remaining from this period:

A shard of mirror

750×79
The header image. The mirrors “slided” open to review the title for each section. At least that was the idea 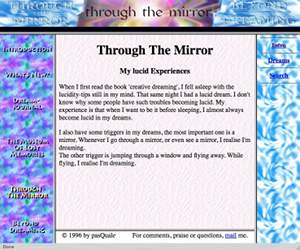 And here is a screen of one of the webpages. [click to enlarge]

The design was inspired by a lucid dream. It didn’t have a lot of text, but many, many animations and images. The aim was to bring in a dreamlike feeling where the visitor could wander around.

A book that didn’t end up in the reality check section, and an alarm clock that did.

Why use plain linked hypertext when you can use clickable animations?

(no, they aren’t clickable in the museum but they served as links in the website)

This is one of my favorite animations I made for the site. This guy was the link to the flying course.

My lovely assistants, demonstrating the two most popular flying techniques.

random fact All animations were made on my amiga 3000 with Dpaint IV.

Because we had this as a navigation frame above each page:

Every section a different colorscheme. Websafe colors, all the thing in those days.

The unofficial logo, derived from the winged figure. It only was in the intro page, rotating in a mirror, acompanied with the “Lucid Tip of the day”. Tell you a secret, it was a javascript which held 30 different tips, one for each day. After the 30th one, it started back at the first tip. I never got any complaints

In this Era, when you typed in LD4all.com, you ended up on a site called “Through the Mirror”. It had a bit evolved. More “feathers” in the navigation wings: 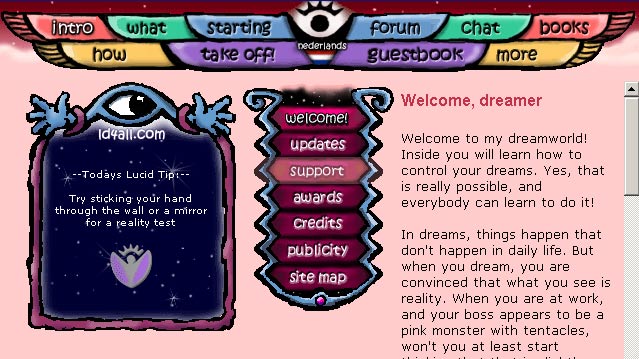 (click to enlarge) Do you notice the “LD4all.com” right below the eye of the mirror?

The Forum
In this era, we got our own hosted forum. Here is what that looked like: (With thanks to greendragon for the screenshot

An extremely rare commemorative plaque, made by the legendary DreamAddict, to commemorate the fact that we had left the old Network54 forum and moved to our own new forum.

The ranks, 5 stars the highest for mods and admin. It seemed a time far far away when a member would reach 5 stars. But that time did come eventually

The LD4all era. A completely new design, with a new logo.
You may have noticed a striking difference with the previous designs: No more wings… instead this colored menubar with an attempt to make it a bit winglike.

The LD4all logo, as well as the inspiration for the layout came from a lucid dream.

The first Quick sketch of the logo, just after waking up from the lucid dream it was shown, a sketch later that day, with dream image still fresh in mind and lastly the final logo.

The forum got a facelift too - and here the lack of wings was even more obvious:

(Click to enlarge - with thanks to xx521xx for the image)
The forum used the same eye icons as the previous forum, but it also had mirror images added for each subforum.

New ranks, rainbow stars for the mods and admin.

The Return Of The Wings
1 september 2007 to today

first “Twilight” version of the wings

And eventually a bit more smooth.

And the logo got a slight overhaul.

The Mirror Collection
Because it was called “Through the Mirror”

Mirrors have always featured in some way or another.

Fun fact: in the First Era however, there was a striking lack of anything resembling a mirror. Possibly because of the overkill in the Prehistoric Era? Maybe I had ran out of mirrors

The mirrors really took of halfway the second Era, when I added decorative borders around the paintings. Before that they were just images. I made it a mirror theme, and every section of the site had their own mirror, with different images for each subsection and bonus images when clicking certain links in the text.

In the transition stage to LD4all I made a huge mirror splash screen.

In the LD4all era, I wanted a mirror to remember the “Through the Mirror” time. I chose one mirror design. The function remained the same: different paintings in the mirror for each section, and also changing images when clicking on certain links. Smaller versions of these are used in the forum.
So if you ever wondered what those were, now you know.

Miscellaneous Artifacts
Artifacts somehow having to do with LD4all.

This is a very old avatar I used to have, with the award I received from Reality_Failure. I only forgot what the award was for

According to moogle it was because of the cutest smiley ever posted in the smiley wars topic. (A topic, long lost, but who knows if it may turn up …)

There was a time where forum members had their own fanclubs

This flag was made by James, (AKA One Armed Scissor) apparently a big fan of Bruno. This flag is known to be waved by other people as well. It even was part of signatures.

When the Philosopher’s cloud was disbanded, Bruno carried it with him all this time, safe in this bottle. This is the original Cloud Bottle, now empty, because the Cloud has been released from it

Historic fact. Moogle reaching 10000 posts and getting a special badge for it

It’s your turn now!
Post your fondest LD4all memories, be it from far in the past or be it from recent times. It would be cool if you can accompany your tale by a screenshot.

You can also post LD4all artifacts you have excavated yourself - these may range from smilies never seen on the forum, to forum icons of now lost forums (or maybe never used?), to the most precious artifacts you just have saved for posterity.
Now is your chance to show them with all of us

Treasures that belong in a specific era may also be put on display there (meaning: I’ll add those to that page

I’ve got no screenies so maybe someone can help me with that- but thanks to Bruno i remembered the best topic ever: Testeiez. I’m pretty sure we broke 100 pages with that one, am i wrong?

I’ve got no screenies so maybe someone can help me with that- but thanks to Bruno i remembered the best topic ever: Testeiez. I’m pretty sure we broke 100 pages with that one, am i wrong?

While we’re at it, I’m changing my avatar to celebrate the occasion.

I’m not an addict. But I might be partially responsible for the Atheist sighting after two years of his not visiting the forum. As far as lost memories go, here are a couple laughs and good moments (most of the so cryptic those actually involved probably don’t remember them):

[/center]
And then there’s that picture. And that thing in my drawer, next to the little orange boat thing. And the lost memories.

Though I do have a key to a building known as the second addict hotel.

Until it was destroyed.

Such as the Apenheul meeting with the Dutch LD4all forum, or meeting Q&A for the first time, giving Bruno a real hug and having a beer with him, aQua/Water and Q&A.

And of course meeting my dearest

I’m still in for :basilus: though
I still have the previous version of the third one too, with a black angel and a fluffy dog close to it as well.

I remember the time I checked on lots of posts, especially from certain people, on the quote button to see if there was anything I was missing from it.

Looking through my photobucket I found LD4wolf from the Wolf Era (click to enlarge)
Yes, I do know this image is only half-completed, but I had to post it soon before the perfect moment was ruined.

Does anyone were the truits truiting Wolf, Iluminada, and Q are stored?

Oh so many things I have found in my travels!
/me donates to the museum:

Some old wings I’ve dug up that seem to be ancestral evolutions of the current quest wings. They also had a brother pair, I can only wonder what that brother pair may have evolved into.

I also found some signatures, enclosed with little wings.

It sure was a stranger time back then.

It is also my expert opinion that THIS may truly be The First Cloud!
The Cloud Of Ancient Times.

Members seemed to enjoy their
active threads watching them back!

There is also this. Another mirror I have come across in my travels.
I believe this one was used to tell the date.

Ah it was indeed a strange time back then, but the love and beauty of the forum has changed so little.

/me wipes a happy tear from his eyes.

that one is cute Bruno

So where did the chicken come from? I can’t remember it.