I wrote “Lucid crap” correctly on an Ipad in my last night’s dream. I told about this dream type to my brother and mother. It was a type of dream that was more significant than a ND. While talking with my mom I gave an example and I jumped to two different scenes: 1) Leaving earth on a spaceship and 2) Looking for earth from the night sky of a foreign planet, the frozen planet. It only lasted for a moment, but I felt the same sadness as I felt when I had that dream over a year ago.

^ I’ve added your points in, Letaali. The next task goes up in about 12.5 hours!

My recall is pretty bad for this one. I do remember looking at myself in the mirror, and I saw a very clear/crisp image of myself.

^ drd, I’ve added that LD into the scores.

The Shapeshifter team averaged 1.67 Task 4 subtasks per member and gets a bonus 40-point subtask for Task 5! Just as in week 2, Scipio carried his team by himself, in stark contrast to last week’s win where only he didn’t score for the team. The Action team averaged 0.75 and the Traveler team managed 0.17. Where did the Traveler team go? I kind of miss them and hope they return soon.

Task 5 will go up in five minutes!

One night i’ll grow as tall as Godzilla and destroy Tokyo.

When you were deciding what team to join at the start of this LC, it was made clear that the Shapeshifter team would be given less points early on and difficult subtasks but would get to decide an important detail about a task late in the LC. Its members were given a survey last week about this task, which coincides perfectly with the release of the latest Godzilla movie. Behold a creature of their design, the Floraiju! 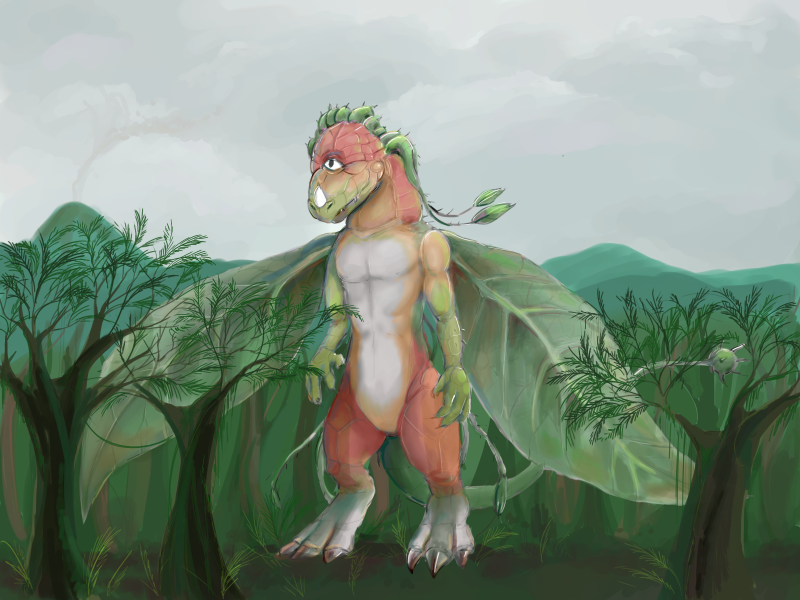 Credit to Wyvern for this depiction of the Shapeshifters’ creature.

Name: Floraiju
Average height: 54’ 2" (16.51 m)
Average weight: 6.47 tons (5866.58 kg)
Habitat: Hawaiian tropical rainforests
Diet: Mostly other plant life, but is omnivorous[/center]
Once worshiped by native Hawaiians as peaceful, intelligent protectors of the islands, Floraiju were long thought to be creatures of primitive myths. However, as urban development in Hawaii continued, deforestation drove them out of hiding. Some of them have taken to venting their frustration at losing their habitats by destroying human cities, taking an eye for an cyclopean eye.

While not Godzilla-sized, 54’ 2" is a few stories high, so the destruction Floraiju leave in their wake is significant. The wing-like leaves protruding from their backs do not support their weight for flight but do serve to slow descents or to serve as extra limbs with which to hit things. Some have even picked up basic English in their interactions with humanity, although nobody has tried to communicate peacefully with one due to sheer fear.

The Shapeshifter team members will be appearing this week as these vicious things, and they are out for the Action team’s blood (how dare they have the most points available before now!). The Traveler team gets cut some slack and won’t be the target of the Floraiju’s ire, but will still need to interact with them for maximum points.

As always, I end with the Team Dream requirements for the week and the team’s incentive for winning the week.

I almost got lucid last night. I was in fact lucid, but I thought I was a different DC, so I guess I wasn’t actually lucid. It was a first for me though, being lucid as someone besides myself.

^ Ugh, those kind of near misses grate on me so much. At least you’re able to look at the bright side and say it was a first for you; I’d be fuming.

Had 3 LDs today. I remembered the LC task that was discussed yesterday in two of them but the LDs ended too soon. Scipio made an appearence in the 3rd one as I tried to make the LC happen.

^ It’s about time you were lucid again. I was starting to miss reading your LDs.

Judging from your sign-up, I marked them as short, but if any felt medium-length, please say so.

Hey, I was just looking at the scoreboard and notice I don’t have the points for entering a restaurant/dessert restaurant when I’ve entered a bakery.

^ Sorry; I didn’t notice because the focus of your sentence seemed to be on the muffins, so I glossed right over it. I’ve added those points in and retroactively added the points to the scoreboard I put up a few posts back.

Since it’s a new page, here’s the obligatory scoreboard link.

[link]
(The second dream there.)

^ The forum told me you dropped offline after typing your DJ entry; I had actually just tried to PM you to bring the task points to your attention when I saw your post here.

I added those points in and I hope you get another LD soon!

Very short LD. >1 min. No tasks completed. I became lucid for like 10 secs then woke up.

^ It beats nothing! I’ve updated the scores.

The Action team decided that since Floraiju are partly plants, they can be burned. They’ll get 30 points if they incorporate fire into defeating a Floraiju with a teammate, while other teams will get 15 points if they join an Action team member for an assault with fire.

I was underground near a train. There was a problem involving flooding and I saw a man turn into a large gray hulk. I turned into a hulk myself so I could communicate with the bigger hulk without dying. I managed to reason with him and he saved everyone.

^ That sounds like a fun ND to have; hopefully such a skill stays with you when lucid, too! I’ve added the points for that, and I hope you get an LD soon. :o

…I held and threw a dodgeball

I ate whipped cream as a DO. I was watching a DC taste some and as she did, so did I. Still a DO after that.

I was also about to order pizza in another dream, but it was past midnight and I was in a friend’s house so I decided to make sandwiches instead.