Welcome to the 58th Lucid Challenge

The Lucidity Challenge (LC for short) is a game that is intended to provide some additional motivation for people who are trying to have lucid dreams. Everyone is welcome, from complete beginner to expert. Each week there will be new challenge tasks posted in this forum thread.

This will be a shorter than usual challenge with 2 weeks of tasks. The proposed start date is Friday 31st March 2017, assuming we have some sign ups by that date!

You score points for having dreams (lucid or non-lucid) and for doing challenge tasks. Lucid dreams score more points: the details of the scoring system are described later in this post.

At the end, the person with the highest score is given the option of hosting the next challenge; if they don’t want to do it, the option to host passes on the second place scorer, and so on. Apart from that, there are no prizes; the goal is to have fun!

When claiming points, you can either post the dream in your DJ and link to it in a reply to this topic, or in spoiler tags in the post if it is short. A brief summary, if nothing else - along the lines of “I had a medium length lucid dream in which I successfully turned my pet cat into a goldfish for the first time”. A full DJ entry is not required for fragments and non-lucid dreams.

Please use this format:

Good luck and may the best dreamer win.

What’s this? Eilatan is first?!

Cool I m super happy to join again. I m having a lot of LDs again since a few days

Awesome! Confirmed start date is this Friday, 31st of March. Tasks will be posted around 11.30am UTC/GMT (whenever I get my lunch break

Even though I’m now living in the middle of woop woop, and have limited access to internet, I think I’ll still be able to participate to some extent. I probe by wont be able to put up and logs, as I’m now using a mobile for my internet, and I don’t have enough time to write full logs. I’ve beenjoyed having about 5-10 LDs a week while I’ve been up here, as my sleep patterns are now running off the sun and moon.

As the winner of the previous challange, I will be taking a handicap for this challange, I’ll figure out the details for that later.

My personal goal has been chosen in an attempt to stop the inception style of exiting dreams from happining. At the moment as soon as I’m falling backwards I wake up.

Anyway, I’ve got to go jump down a cliff now, I’m looking forward to another great LC

Last night I had a non-lucid dream of Letaali’s frozen planet. (No points for this, obviously, the LC hasn’t started yet). It looked like Finland in winter/Canada/Russia. The railroad implies a large continent, larger than Finland.

Last night I had a non-lucid dream of Letaali’s frozen planet. (No points for this, obviously, the LC hasn’t started yet). It looked like Finland in winter/Canada/Russia. The railroad implies a large continent, larger than Finland.

Nice! If on my next visit I don’t land near the town inside the mountain, I’ll know there’s a train that can take me there.

Couple days ago my frozen planet dream turned 4 years old and I still haven’t gotten back there. It’s embarrassing. 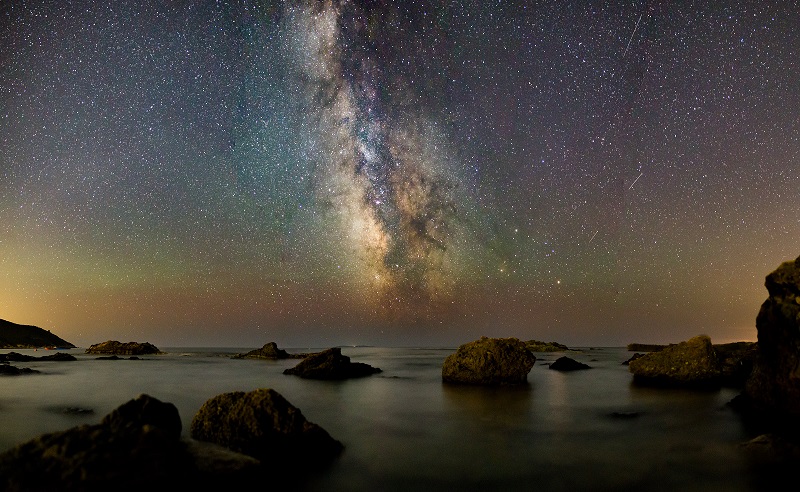 A little intro…
You are no stranger to the night. Where others seek sleep merely as respite for the day, you step willingly into the dream world, eager to explore. The dream forms and you are standing on a beach. The sun is setting far out over the ocean. A little further up the beach you see a small campfire. A few other dreamers have already gathered around it.

As you walk to the fire the sand underfoot is still hot from basking in the sun all day. The figures standing or sitting around the fire are mostly quiet as you approach but they nod and greet you. Obfusc8, the one in the armored motorcycle gear despite the warmth of the night, raises a finger to the sky.
‘You know where we haven’t been in a while? Up there. Space. The final frontier…’

Along with the other dreamers you raise your eyes upwards to the cloudless night sky. Stars glitter, inviting you to come join them.
‘Well, off you go. I’ll keep score.’ Obfusc8 says, lying down by the fire, staring up at the stars.

TO INFINITY…: Start with your feet on a planet and get into outer space. 30pts. You could grow until your head is out of the atmosphere, or fly, use a rocket, teleport, you choose.

STAR POWER!: Eat a star. 30pts. No need to be in space to do this, just grab one out of the sky and nom nom nom… Mario becomes invincible, what will happen to you?

…AND BEYOND: Go through a black hole. 30pts.

SHOOTING STAR: Fly fast through space. 30pts. Always fun. What do you see? What do you feel?

MOON WALK: Do an ‘astronaut walk’ in low gravity. 20pts Long slow leaps across the moon or any planet’s surface. No requirement for this task to be done on the moon - mess with dream-Earth’s gravity if you want.

BOLDLY GO: Meet an astronaut or a creature/alien that has travelled through space. 20pts. So, native/indigenous population of another planet would not count unless they have a means of space travel. Seeing their space ships is good enough, as is encountering an alien while on a space ship.

Example 1 - You become lucid and want to do the moon walk task but figure it will be easier to do it on the moon. So you teleport (+5 dream control points) to the moon, then start leaping around in low gravity (+20 task points)

Example 2 - You become lucid and want to do the eat a star task, but it’s daytime in your dream. So you change day to night (+5 dream control points) and then grab a star out of the sky and eat it (+30 task points)[/spoiler]

I LOVE these tasks! I will try my best to get something done. I checked scoring and it looks like I get the same points regardless if I do a task lucid or not? Not halved for non-lucid?

Glad you like the tasks. I’ve done a few of these in my own lucid dreams and hope you guys have fun with them too. Eating a star, for me, was like a double vodka-red bull with an expresso chaser. Felt awesome in the dream and woke with euphoria.

The tasks are all full points whether done lucidly or non-lucidly - you get lucid dream points and the early/lucid 20pts bonus anyway, so I don’t feel the need to reduce points further if you get a lucky non-lucid hit.

How would you like us to claim the non-lucid dream points? If we post in this thread a link to our dream journal every night we’ve had a non-lucid dream, that’s going to be a lot of posts.